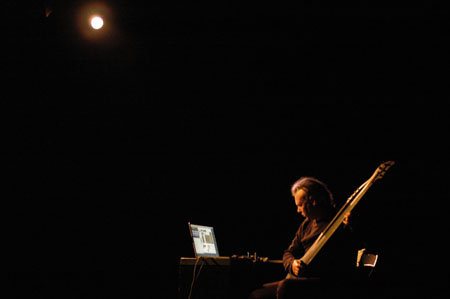 Difficult to explain exactly what the BassComputer is, but it is at least 2 things, in one:

1/ an aesthetic idea, or how to make music - or what should music be - in 21st century; at least in the beginning of this century. The way I see it it has a lot to do with the notion of noise/pitch (or pitched noises) - the unknow frontier between the 2. Also the notation - once you decide to produce music which is made of masses and relations between them, made of noises, made of granularity, the traditionnal notation is not of great use. I, however, still belive than writing music (as opposed to "just" producing sounds) is a great great strength. What else - the computer of course, as a machine which helps us to produce the sounds we want to hear, but also helps us to _think_ the music, to structure our ideas. Not quite an instrument - a little more, a little less.

2/ it is also the instrument - a hybrid of an electric Bass and of the computer seen as a real-time instrument. It is much more than plugging a bass into a computer, and using the computer's DSP as effects. It is not only about _transforming_ the sound produced by the bass (instrument) and its components/infos (pitch, duration, timber): it is about an instrument with 2 possible ways to get in - the bass strings or the computers keyboard/trackpad/generators. The idea here is to get away with the usual organologic limitations - infinte ambitus and infinite polyphony (and infinite polyphony of timbers) - at least in theory.

Then I found this, on the web: some guy's blog, at http://public-access.org/page/5/ describing my work - and the concerts at GRM, march 2006 when playing on my BassComputer the Eliane Radigue's ELEMENTAL II, and my own Lärmesmitte. He totally understood what i am after, why and how the bass, etc. The best introduction to this part of my work. Thanks Bastien (the blog is http://public-access.org/):

Kasper is just amazing, he has broken so many walls : you can’t tell if he is an academic composer (he has won many prizes) or a noise musician when you hear his compositions or a punk rocker when you see his look. That’s something I really like in Kasper, he takes good stuffs from different places. He was actually a bass player before, then he gave up playing bass to focus on computers but now he has mixed them with a totally revamped bass, his instrument is just beautifull. He plays his instrument without any of the rituals attached to the traditional “rock” instrument, something I really appreciate. He played twice during the festival, the first time to present “Larmesmitte”, his own composition for solo BassComputer and the second time he played Elemental II, a composition by Eliane Radigue. Most of his work in these pieces was done throw playing with a kind of electronic wind. 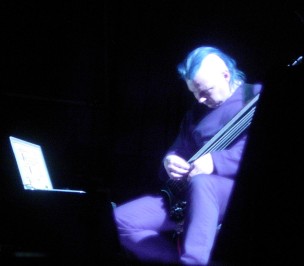 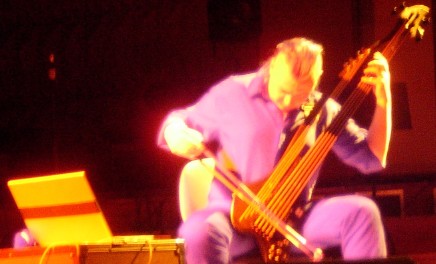 Apart from my own compositions for this instrument, I also ask some composers - whose work I feel being great, of course, but also when i have a feeling my playing could add a little "more" to their music - to write pieces for me, or for the BassComputer. What are the "obligations" is always more or less the same :

___I ask for "long" pieces - that is more or less one hour, the duration of a CD, or an evening; also because i am fed-up with the usual 13-minutes pieces;
___They don't have to worry about the instrument - the idea is to play the music, not an instrument;
___For each piece i also write the corresponding computer program - so far it means a MaxMSP patch, but it could be another program - Reaktor, CSound, SuperCollider... It's just than Max feels easier to me;
___Most of the time the idea is to play all of the music in real-time - no sound-files, no samples... That is unless the composer really feels it is a big part of his work/style (such was the case with Phill Niblock);
___the rest is a question of discussions with the composer and me.....

The "critic's choice" of the Chicago Reader - Friday March 24, 2006 - on march 26th I played BassComputer there, at LAMPO, a very good concert - and a very long one, almost 3 hours of solo music:

Clad in black leather and sporting a Mohawk, Kasper T. Toeplitz strikes a badass pose onstage, and his music backs it up.
At his first Chicago concert in 2001, the Warsaw-born, Paris-based composer, bassist, and computer musician premiered "Yam Almost May," a throbbing yet lyrical drone piece by Phill Niblock composed from samples of Toeplitz's bass, and the low frequencies seemed to hit listeners' guts as hard as their ears.
For last year's Capture (released on Toeplitz's label, ROSA, an acronym for "Recordings of Sleaze Art") he captured the movements of three dancers via webcam and electronically translated them into sound, generating a slowly accumulating onslaught of flickering high tones and ear-scouring hiss.
For this show [March 25] he'll perform the U.S. premiere of Elemental II by Eliane Radigue, a French septuagenarian who's an unlikely collaborator for Toeplitz. Her detailed, gradually evolving electronic works evoked a meditative state even before she converted to Buddhism three decades ago, and she had never written a piece for another musician to play live. But Toeplitz successfully melds their disparate sound worlds on his recording of the piece. He first weaves a surface of coarse, frayed fabric, then pulls out intricate patterns of radiant, glassy pitches; about a half hour into the 50-minute performance a steady stream of wavering, ascendant sweeps, sounding more like bowed violins than bass guitar, escape like jets of steam from deep within the earth. Once the pressure's relieved, the piece resolves into distant groans, as if Toeplitz had made a field recording of shifting tectonic plates. Toeplitz will also play three of his own compositions. ------ Bill Meyer

But in the meantime at least a picture of my main bass, custom-build by Philippe Dubreuille. It's a beautiful instrument.... 5 strings, + 4 resonant strings... and many more. The pickups were made by Benedetti, and the midi implementation by MESI 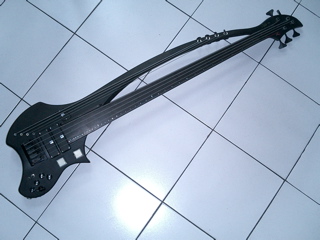 More about instruments is here.
And all the "computer" part of it is done mainly with MaxMSP , even if sometimes it can be other softwares as Reaktor, CSound... and various plug-ins